Laurie Lee’s A Village Christmas, and other things

I read about Laurie Lee’s A Village Christmas and Other Notes on the English Year at dovegreyreader’s wonderful blog early in November and I’m hoping it will end up under our tree this year. I’ve already bought it for several friends. 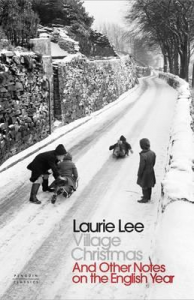 A perfect book for this time of year (Lee’s daughter Jessy discovered seven pieces by her father in the British Library archive: they’re published for the first time in this collection). As dovegrey said:

I can’t think of anything not to love about it.

And here’s a man whose courage, sense and sensibility I’d like to emulate in a world where time is infinite and all things are possible. Nicholas Henin makes sense (not war) by suggesting that if we give Syrians refuge and don’t fly over (or bomb) their safe areas we’ll show Isis that the ‘infidel’ is kind to and welcomes peace-loving Muslims and Isis will lose both their enemy and their recruiting ground.

PS: My second novel, The Dance of Love, has found itself with a new publisher this month (new to the novel, not to the world of publishing) because of the sad demise of Robert Hale and so the imprint that published it, Buried River Press. The new publisher is called Crowood Press and the new distributors are Grantham Book Services. For a writer to lose one publisher (as happened with Speaking of Love and Beautiful Books) might be considered bad luck. To lose two is … well Oscar Wilde said it better, if in a – slightly – different context. Perhaps, when my third novel’s ready to be sent out into the world, my third publisher will prove lucky (for itself and for my novel). In folk tales, legends, myths and fairy tales the third attempt is always the time when things change … .

And I do hope that 2016 will bring you much of what you’d like and very little of what you wouldn’t.