How to Avoid a Climate Disaster: Bill Gates (& Gordon Brown)

In this Guardian review of Bill Gates’s How to Avoid a Climate Disaster, Gordon Brown writes: 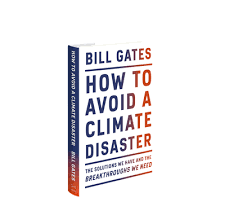 Among other possibilities for global cooperation, Brown is talking about COP26, the 26th Conference of the Parties (on Climate Change) that should have been held at the end of 2020 but, for obvious reasons, wasn’t. It’s now planned for November this year, in Glasgow, and, because of agent orange’s departure from the White House, there will, thank goodness, be an American contingent there too.

Show me a problem and I’d look for a technology to fix it.

but he also says:

I don’t have a solution to the politics of climate change.

And that’s the problem with both an agreed global climate change policy and agreed global action. Gordon Brown quotes John Maynard Keynes’ frustration when he couldn’t persuade the political leaders of the 1930s that his economic ideas offered a way out of world depression and mass unemployment. He said, of politics, that it promoted, “The survival of the unfittest”. And that, “The difficulty lies not so much in developing new ideas as in escaping from old ones.”

May the world leaders and environmentalists who will meet in November in Glasgow, as Gordon Brown says, enlist:

Vested interests like big oil … . [And may] The populist nationalist and protectionist rhetoric of irresponsible demagogues … be taken head on … . Supporters of a stronger set of commitments [on reducing emissions] will have to show why sharing sovereignty is in every nation’s self-interest, and that coordinated global action is indeed the only way to end the mismatch between the scale of the environmental problems we face and our current capacity to solve them.

If there were a billion people living on the planet, we could do whatever we please. But there are nearly seven [nearly eight now] billion. At this scale, life as we know it today is not sustainable.

I write fiction about the difficulty we have when we try to say what's in our hearts.
View all posts by Angela →
This entry was posted in Climate Change, Politics. Bookmark the permalink.