On this centenary of the tragic sinking of RMS Titanic

My great-grandmother, Noël Rothes, set sail from Southampton on RMS Titanic on 10 April 1912. She was one of 2,224 passengers and crew bound for New York. She was also, very luckily for her, one of 712 who were saved.

She boarded lifeboat number 8 at 1 am in the morning on 15 April 1912. She did everything she could to comfort a seventeen-year-old Spanish girl who had had to say goodbye to her eighteen-year-old husband (it was their honeymoon) and, despite the freezing cold and the fear, she remained calm, at least on the outside, and helped as many of the lifeboat passengers as she could. When Able Seaman Thomas Jones realised Noël also understood boats he put her at the tiller where she remained (he was the only seaman aboard), except when she took one of the oars or helped others learn to row, until they were picked up by RMS Carpathia at 8 am.

For her courage and tireless work, Able Seaman Thomas Jones made this for her, from one of the 8s he took from the bow of their lifeboat: 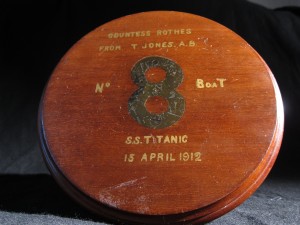 8 from the bow of the lifeboat, set for my great-grandmother by Able Seaman Thomas Jones

She said, when it was suggested to her that she would become famous for the things she did the night Titanic sank: ‘I hope not. I have done nothing.’ And that, I think, is how she would like to be remembered.

Soon after they arrived in New York Noël wrote this to her cousin:

The Press people here are really awful – one is never free and they are always printing imaginary interviews and photos of you which is maddening.

In an attempt to refute their ‘imaginary interviews’ she agreed to an interview with the New York Herald on 23 April 1912. She spoke about the terrible events of the night of 14-15 April 1912.

She praised the engineers who died at their posts stoking the furnaces so the passengers could see their way to the decks.

And then she said:

They were brave men all who stood back so that women should have at least a chance to live. Their memories should be held sacred in the mind of the world forever. 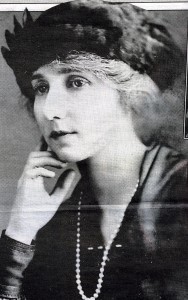 I think if she knew she was remembered 100 years later for what she did the night RMS Titanic sank, she would have been astonished. But if she knew that her words in praise of the brave men who stood back so that at least some of the women might be saved were also remembered, that might have been a comfort to her.

She wanted those who died to be remembered, not those who were lucky enough to live on.

I write fiction about the difficulty we have when we try to say what's in our hearts.
View all posts by Angela →
This entry was posted in Titanic and tagged Uncategorized. Bookmark the permalink.