I thought perhaps my wonderful editor might have sent me her report on the final draft of WRITTEN in WATER by the beginning of this week, but because she is a careful thoughtful editor it won’t be with me until the end of this week now, to give her the time she needs. But she did say, ‘I am really enjoying it again’, so all I can hope is she’ll feel like that all the way to the end of this (I hope) final draft. Then I can make whatever revisions are necessary and wing the mss to my agent for (with any luck) a sale before Christmas (that would be a wonderful present). If not, fingers crossed for a sale early in 2012 (the Titanic tragedy anniversary year). 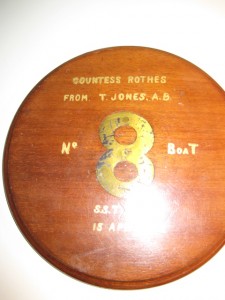 This was beside me while I wrote WRITTEN in WATER and every time I pick it up, or simply look at it, I am filled with admiration for all those whose courage and selflessness (and singing voices) comforted hundreds of cold terrified passengers on that dreadful night.

And now for my monthly something-I-would-love-to-have-made:

I would love to have directed and written the script for A BEAUTIFUL MIND.

To my mind it is the most exquisite, tender film about one man’s mental disintegration (and, happily, his reintegration). There is a small section towards the end of the film which I reinvented (and acknowledged) for a scene in SPEAKING of LOVE where – look away now if you don’t want to know – John Nash asks two young students if they can also see a man who is asking him if he will allow the faculty to acknowledge and honour his work, something they refused to do much earlier in his life. He says, (I paraphrase) ‘Can you see him?’ And when they reply that they can, he says, ‘Just a habit. Something I do these days.’ But that little something encapsulates the whole horror of his schizophrenic hallucinations which by then were, happily, a thing of the past.

And Russell Crowe is incredible in the film. And Ron Howard’s direction is marvellous.

It moves me to tears every time I see it, and not just at the scene I’ve just described. It is a magnificent tribute to the power of the human mind to heal and to the courage of those whose minds travel along paths they would rather never travel.

PS: This post is now part of the THIRD SUNDAY BLOG CARNIVAL. Have a look. There are some interesting posts about writing and poetry and the whole glorious (and sometimes not so …) process.

I write fiction about the difficulty we have when we try to say what's in our hearts.
View all posts by Angela →
This entry was posted in Dance of Love, The, Things I'd Love to Have Made, Titanic and tagged Uncategorized. Bookmark the permalink.