Scared to say ‘I Love You’?

Last week Paul McCartney admitted to John Wilson on BBC Radio 4’s Front Row that he was scared to say ‘I love you’. Instead he wrote the words into a song for his wife, Nancy Shevell. The song, Scared, reviewed at the end of this link, is a hidden track at the very end of McCartney’s new album, NEW. It’s a beautiful wistful ballad in true McCartney Yesterday style and its lyrics, which begin at 5’40” on this link include the words:

This week SPEAKING of LOVE, a novel that asks why those words are so very hard to say, is reissued in a new Kindle edition. As one of the characters says:

The real risk, it seems to me, lies in not talking about the things that matter the most. That’s what made Iris ill. What we don’t say doesn’t go away. 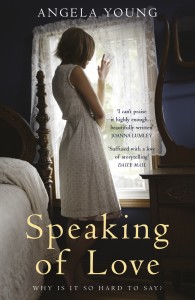 I know, in the past, I haven’t said the words for fear of ridicule and rejection. Do you know why you haven’t (if you haven’t)?

I write fiction about the difficulty we have when we try to say what's in our hearts.
View all posts by Angela →
This entry was posted in Love, Speaking of Love and tagged Uncategorized. Bookmark the permalink.