Searching for the Secret River

I’ve just finished reading Kate Grenville‘s Searching for the Secret River: it’s brilliant, and a must-read for anyone who writes historical fiction (my second, about-to-be-redrafted, novel is one of those). Searching for the Secret River is a kind and wise book about writing and the process, the stumbling blocks and the breakthroughs. It’s about the gradual accretion of things – including things that have just happened in your own life that might prove to be part of the eventual book (like overhearing a spitting competition between one of her children and a friend and transposing it to an eighteenth-century London wharf). It’s about realising that sometimes you end up with more than one story in your book and you must choose which story to cut and which to keep; it’s about beginning with non-fiction and realising that the best way to tell the truth about a particular series of events is through fiction because fiction allows the writer the freedom to write scenes that didn’t happen (or cannot be proved), but scenes that illuminate and make resonant what did happen.

The hard part of the writing wasn’t finding the words – they seemed to come reasonably easily. If they started to come reluctantly, I stopped and began with something else. The hard part was finding the picture. Once I could see and hear the moment, I could write it … . The worst times were when I tried to write the scene anyway, throwing words at something I couldn’t see or hear … . I’d read it back and groan aloud at the deadness of it. It was dead because it was phoney … . [There were] no pictures, no sounds, no smells – no life.

from pages 159-160. The spitting part comes just after that … . And I shan’t forget the seeing and the hearing and the sounds: they will be my touchstones from now on. Thank you, Kate Grenville. And in the end this wonderfully lucid book showed me that to write fiction you must be prepared for anything and everything to happen as you write and not allow any of these things to discourage you, even the fact that it might take five years. Grenville quotes from The Letters of Jane Austen: ‘In the night we invent a few hard names for the stars.’ As she says, ‘Who knew what Jane Austen meant by it, but it set off a vivd image in my mind … .’ And that is surely the whole point.

And the thing I would have loved to have made this month is a sculpture made by a dear friend of mine: 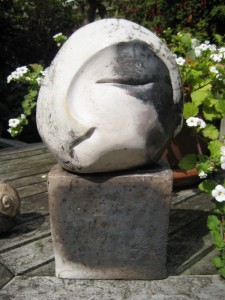 I call her Moon Woman, although she was never given that name when she was being made. But isn’t she beautiful?

I write fiction about the difficulty we have when we try to say what's in our hearts.
View all posts by Angela →
This entry was posted in Reviews, Things I'd Love to Have Made, Writers, Writing and tagged Uncategorized. Bookmark the permalink.

4 Responses to Searching for the Secret River