The Bookbag’s Top Ten Self-Published Books of 2013, and Visitation, a haunting image by Robert and Shana ParkeHarrison

I’ve just heard that the Bookbag has included Speaking of Love in its Top Ten Self-Published Books for 2013. Very exciting. Thank you, Bookbag.

And a couple of weeks ago, at ENO‘s miraculous Magic Flute, directed by the ever-inventive Simon McBurney I saw, inside the programme, some of the most haunting, poetic and beautiful images I’ve seen for a long time. They come from a series called Earth Elegies by Robert and Shana ParkeHarrison. One of them particularly touched me, the one that appears here called Visitation, but they are all surprising and miraculous and at the same time true in the way that dreams are true: 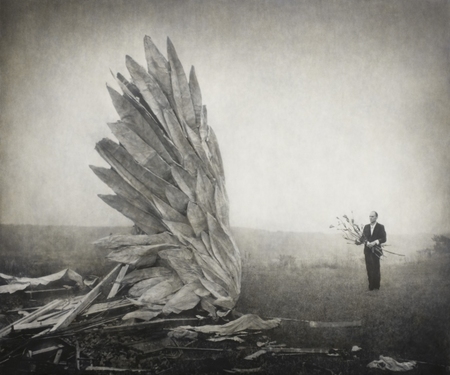 This image haunts me particularly because I am inventing an angel for my novel-in-progress, For the Love of Life. And, perhaps, it’s also an image that suits the time of year.

I write fiction about the difficulty we have when we try to say what's in our hearts.
View all posts by Angela →
This entry was posted in Artists, Speaking of Love, Things I'd Love to Have Made, Third Novel and tagged Uncategorized. Bookmark the permalink.