The making of character

Sometime last week I heard part of an interview with John le Carre about the making of character. This is what he said:

You can’t actually make up a character out of other people, you simply can’t. You grab the bits that are appealing to you, that touch you or alienate you, but in the end you’ve got to make them sit up and run and talk and laugh and fail, from bits of yourself. [my bold]

Somehow or another you’ve got to extend your own nature wide enough to be able to say, ‘Yes, in those circumstances I could commit murder.’

Here is the interview in full. It was made for Front Row, the interviewer was the inimitably wonderful renaissance man, Mark Lawson, and it was first broadcast on BBC Radio 4 on 22 May 2009. This part is about nine minutes in. Heaven knows how I heard it last week, but I’m so glad I did. It’s so very reassuring to hear, from a master, that, somehow, and with a large spade or a small scalpel, I’ll draw mine out of me, too.

And there’s a silly little bonus at the front of the interview: it’s Brenda saying, ‘Yes, Tom. Yes, yes, yes.’ (At the end of The Archers. Do you need to ask?) But, almost four years later, they’re still not married. Will they ever tie the knot?

And the pieces I would love to have made – they’ve been haunting me recently – are Antony Gormley‘s iron men. Perhaps it’s their unexpectedness in the landscape, or their loneliness, or their simple beauty, or their stillness, or all of these things that set me thinking about what it is to be a living human who finds herself on this strange and beautiful planet, both observing and observed. 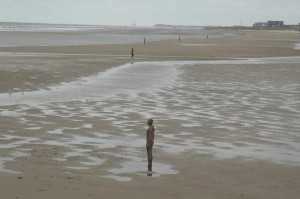 I write fiction about the difficulty we have when we try to say what's in our hearts.
View all posts by Angela →
This entry was posted in Things I'd Love to Have Made, Writers, Writing and tagged Uncategorized. Bookmark the permalink.