A few weeks ago I did an Introduction to Mindfulness day at the London Mindfulness Project (whose rooms are in the astonishingly beautiful, Georgian Fitzroy Square, at No 6): 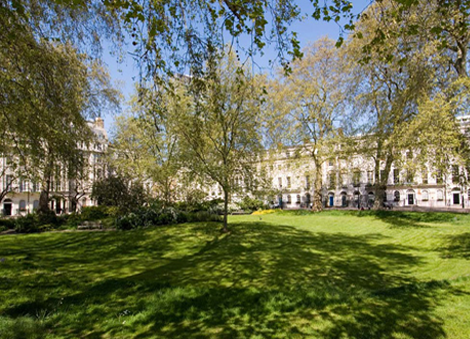 No 6, according to the Georgian Society, has:

Over the years … become associated with high-end Bohemian residents many of whom had and have prominent careers in the arts. George Bernard Shaw, Virginia Woolf and Robert Louis Stevenson all resided here at some point and the tradition continues with Ian McEwan who made Fitzroy Square the prime setting of his 2005 novel: Saturday.

Appropriate then that a ‘Powerful practice of training our attention’ should now have its London rooms at No 6 since, it seems to me, writing fiction is also a powerful practice of training our attention, both for readers and for writers. But, as I was thinking about mindfulness (I wrote a bit about it here too) and the difference it’s made to my daily round (it has, I do seem to be concentrating better, for longer, and I also seem to be less subject to stomach scrunching stress … long may it last … long may I practise) … but I was thinking, what proof is there that it works? I mean when you’re meditating you’re meditating; when you’re practising mindfulness you’re practising mindfulness. How can there be a control group, a placebo, to discover any changes in the brains between those who’ve mindfully meditated and those who haven’t?

Well, they’re on to this, at the London Mindfulness Project: in their Spring newsletter they include a report of an experiment that shows that mindfulness does work, does cause changes in our brains. The study reported:

Follow-up brain scans showed differences in only those who underwent mindfulness meditation. There was more activity, or communication, among the portions of their brains that process stress-related reactions and other areas related to focus and calm.

The way they conducted the experiment is recorded here, in a New York Times article. What they don’t know is how long you need to practise mindfulness for before these changes occur (those in the experiment did three consecutive days) but essentially they managed a control group, a placebo, in which people didn’t know they were fake-meditating!

One of the questions they asked after the mindfulness day I did was: how often to you stop to smell a flower? I can’t remember what I answered, but I do, at least sometimes, stop. These narcissii, pushing up in our small London plot, are smelling delicious at the moment: 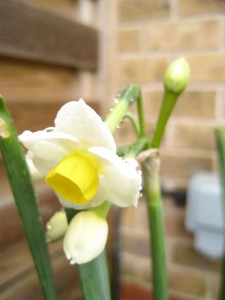 And then I discovered these which, in a parallel universe where time is infinite and all things are possible, I would love to have made: they’re tools that attach to the nails of subversive (or guerilla) gardeners. Remarkable (and funny):

I write fiction about the difficulty we have when we try to say what's in our hearts.
View all posts by Angela →
This entry was posted in Creativity, Design, Gardening, Mindfulness and mental health, Places, Things I'd Love to Have Made, Writing. Bookmark the permalink.