Ideas are NOT stories; and the Biblioteca Jardim

It becomes obvious if you write,
but perhaps not if you don’t:
ideas are not stories.

Before I wrote or, at least, before I finished a novel, I didn’t grasp this fundamental fact because ideas, when they come (and I’ve no idea where they come from) are so exciting. They’re the fuel; the energy; the surge; the thrill; the I’ve-got-an-idea-so-now-I-can-write part of writing.

But an idea is just that: an idea. It can be written on one line or told in a few seconds. It’s the elevator pitch. It’s not the story.

If you make your characters properly they will simply do what is within them, they’ll act out the nature you have given them, and there – you’ll find – you have your plot [p38].

And as Neil Gaiman writes here:

The Ideas aren’t the hard bit. They’re a small component of the whole. Creating believable people who do more or less what you tell them to is much harder. And hardest by far is the process of simply sitting down and putting one word after another to construct whatever it is you’re trying to build: making it interesting, making it new.

I’ve been re-discovering this while writing my third novel: I’m about to begin again … .

And this month’s thing I’d love to have made in a parallel universe where all things are possible and time is infinite is: the Biblioteca Jardim in the Estrela Gardens in Lisbon. 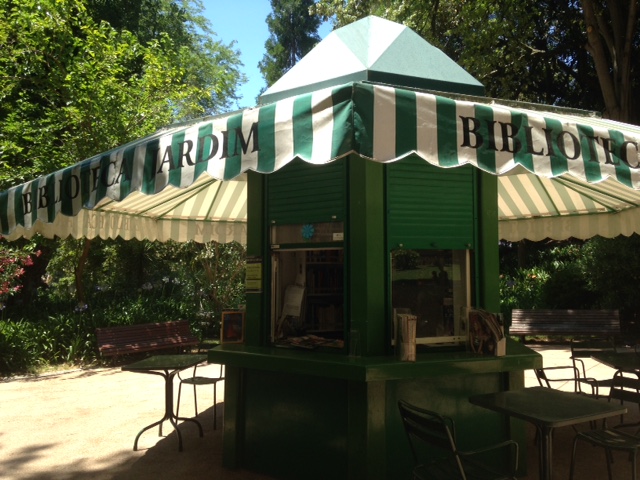 It was built in the 1920s, fell into disuse but was resurrected and it’s such a fine idea: there’s a choice of 1,000 books to borrow as well as magazines, newspapers and games. There’s shade to read them in and no need to weigh yourself down with your own book(s) or newspaper(s) while you walk. Just sit and surprise yourself with what you might read one sunny afternoon in the Estrela Gardens.

I write fiction about the difficulty we have when we try to say what's in our hearts.
View all posts by Angela →
This entry was posted in Things I'd Love to Have Made, Third Novel, Writers, Writing. Bookmark the permalink.