On September 29, 2021, in Cardiff, a statue was unveiled to Betty Campbell, the first Black British headteacher in Wales, and the first to teach Black British History all the time (not just in Black History Month – which began in October 1987 in the UK, and is celebrated, in the UK, every October.) 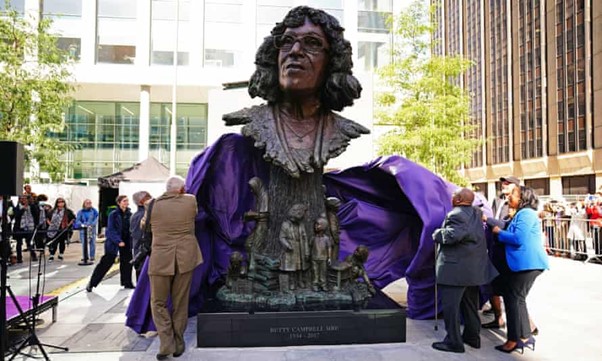 Picture from this Guardian article

This article, published when Betty Campbell died in 2017 (and partly reproduced here), appeared in the Independent. It tells the story of Campbell’s life and work. She was born Betty Johnson in 1934, and grew up in Butetown (also known as Tiger Bay, from the fierce currents on the River Severn) south Cardiff. She won a scholarship to Lady Margaret High School for Girls, where most of the other students were white. When Campbell told the headmistress she’d like to teach one day, she was told: ‘The problems would be insurmountable.’ She never forgot those words. ‘They made me more determined,’ she said. ‘I would become a teacher by hook or by crook.’

In 1960, Campbell went to Cardiff Teacher Training College, which had begun taking female students for the first time and, when a position opened up at Mount Stuart Primary School, in Butetown, she applied. ‘They hadn’t seen a black teacher before,’ she said. ‘It was as if you could do a job, but if you’re black you’re weren’t quite as good.’ 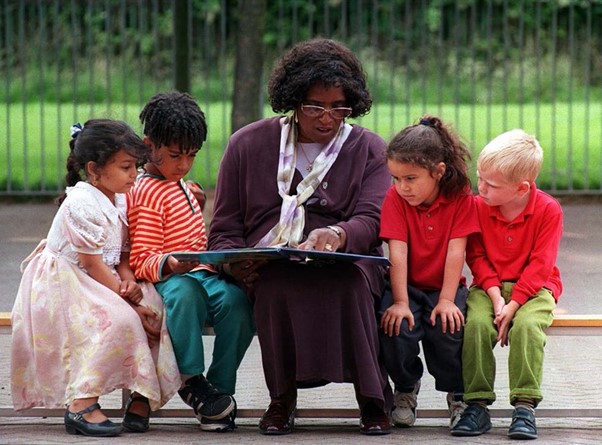 Despite this, in the 1970s, Campbell became the first Black headteacher in Wales and promoted a diverse curriculum, one that included Black people’s experiences and their positive contribution to British society. Pupils have spoken of how every month was Black History Month. ‘Children,’ Campbell said, ‘should be made aware.’

Campbell taught a series of workshops for Black History Month to raise awareness of the role of Butetown’s citizens in the Second World War, and the involvement of their countries of origin, right up to her death. But Betty Campbell is a deplorable rarity in our education system. The numbers of Black headteachers in England (from a 2019 government School Teacher Workforce study) is a miserable 1% of the total in England (200 of 22,300). The numbers of Black teachers is not much better (2.5% of the total in England). And Black history is only taught during this month, October.

Josephine Namusisi-Riley, a Black woman I’ve recently met, tells a story about how, when she was Chair of Governors of a school in Lambeth, the school’s leadership was given the task of diversifying the teaching staff. But that task was changed to employing and retaining the best calibre staff. Obviously any school would and should do all it can to employ and retain the best calibre staff, but this change of wording dismissed the equally essential task of diversifying the teaching staff so that newly-recruited teachers would not only be well-qualified, but would represent their communities well. So that Black students would see someone who looked like them, leading them. And Black history might be taught, as Betty Campbell taught it, every month, not just in Black History Month.

{The last paragraph was edited at 15.30 on 14 October to include Josephine Namusisi-Riley’s name and more details of what happened when she was Chair of Governors of the school in Lambeth.}

I write fiction about the difficulty we have when we try to say what's in our hearts.
View all posts by Angela →
This entry was posted in Antiracism, Education, History, Human Rights, Racism. Bookmark the permalink.