RMS Titanic: on this day 106 years ago … & Samira Addo, Portrait Artist of the Year

It’s 106 years ago today that the ‘unsinkable’ passenger liner, RMS Titanic, hit an iceberg and sank in just two hours and forty minutes. For years the tragedy was a matter of private internal horror: people didn’t talk about trauma then and only two years later the First World War broke out, eclipsing Titanic’s tragedy with its own tremendous tragedies. Then came the influenza epidemic, bringing tragedy upon tragedy, then there was a brief respite before the Second World War brought more terrible tragedy … so it wasn’t until the release of A Night to Remember in 1958 (a film based on a book by Walter Lord and starring Kenneth More) that public consciousness of the Titanic tragedy surfaced.

My great-grandmother, Noël Rothes, helped pilot Lifeboat No 8 which was commanded by Able Seaman Thomas Jones, but although her family knew she’d sailed on Titanic and had survived, no details were known until after she died in 1956 (she never talked about the tragedy). But when my grandfather and my aunt were sorting through Noël’s papers they found letters, newspaper cuttings, her evidence to the enquiries into the disaster and a plaque that Able Seaman Thomas Jones had made for her to thank her for her:

courage under so heartrending and terrifying circumstances 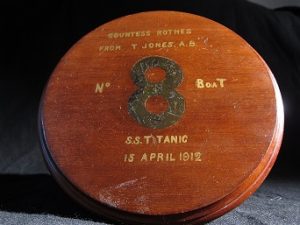 Bronze 8 from Lifeboat No 8, RMS Titanic

We make much of the Titanic tragedy these days (I include myself, I give a talk about my great-grandmother and the able seaman and how they worked together in Lifeboat No 8) but it is salutary to think that, at the time, many of the survivors never talked about it.

On a happier note, the things I would love to have made this month – in an alternate universe where time is infinite and skills multifarious – are Samira Addo’s portraits, particularly her Portrait Artist of the Year winning paintings. Here they are: 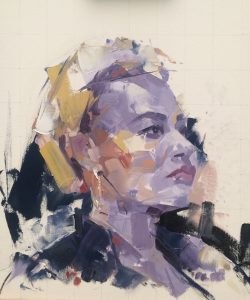 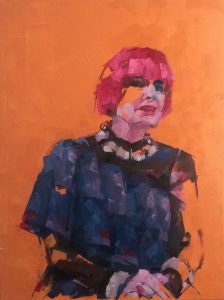 Aren’t they stunning – even in these small reproductions? Here’s how Addo talks about herself and her work and you can see all her portraits here and here. Before Addo’s work was chosen to win, one of the judges, Tai Shan Schierenberg, the only portrait artist among them, said:

What we want to see is not only the ability to capture likeness but to make art, to make something that tells us about what it is like to be alive today.

I wanted Samira Addo to win from the beginning of the final. Her work stood out for its brave originality. Hers aren’t conventional portraits: her approach seems to me to be to paint a likeness with a vision that shows the person clearly, but her unconventional colours and the way – sketch-like, apparently rough but actually not rough all when seen finished – she captures the nature, the very essence of a person as well as what that person ‘looks’ like is, I think astonishing. Tai Shan Shierenberg was in tears as he tried to describe that ‘extra something’ that Addo’s work has. When he found his voice he said:

Portraits are about the specifics of a person at the same time as being about shared human experience and I like that to come across in the paintings being made during the competition. Portraiture has a long tradition, of course, but I always hope to see artists who have found a way to reinvigorate it or reinvent it with their unique artistic language.

Addo’s work undoubtedly does that. But when Tai Shan Shierenberg was momentarily lost for words I thought he illustrated perfectly the point of great art: it doesn’t need words, it speaks for itself.

I write fiction about the difficulty we have when we try to say what's in our hearts.
View all posts by Angela →
This entry was posted in Artists, Creativity, Things I'd Love to Have Made, Titanic. Bookmark the permalink.