Since 2004, Oxford University Press has been publishing volumes of City Tales, collections of short stories set in European cities translated into English. The guiding idea is to give the English-speaking reading traveller (I paraphrase):

Stories expertly translated by writers with an intimate knowledge of the city in question. The collections have black-and-white photographs to illustrate each story and a map to show their location.

This, to me, is the best kind of guidebook: fiction set in a city I’m visiting which means the streets and squares I go to are filled not only with themselves, but with images from the stories I’ve just read. The collections include bibliographies of the writers, lists of further reading and viewing for each city, informative general introductions and more specific introductions to the writers. The one I’ve begun reading, Rome Tales, includes stories from fourteenth-century authors (Boccaccio and an Anonymous Roman) to the twenty-first century Melania Mazzucco by way of Casanova and Pasolini to name just six of the fourteen. 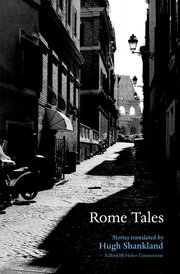 Clearly it’s time I went back to Rome.

And the thing I’d like to have invented in a parallel universe where time is infinite and all things are possible is HIVE. It’s a way of buying music, DVDs and, especially, books online, but at the same time making a donation to your local independent book shop so they won’t go under. What they say, here, is:

We don’t want any more independent bookshops to close. That’s why we give them a cut from every single order on Hive.

It’s still better by far to go to your local indy, but if you can’t, or if there’s no longer one near you, this seems to be the next best thing. My local bookshop didn’t appear on HIVE’s list but any bookshop can apply to join (and I’ve just sent mine the info). The only rule appears to be that they have an account with Gardners (who distribute books, DVDs and music wholesale).

I write fiction about the difficulty we have when we try to say what's in our hearts.
View all posts by Angela →
This entry was posted in Bookshops, Fiction, Places, reading, Reviews, Storytelling, Things I'd Love to Have Made, Uncategorized, Writing. Bookmark the permalink.