This month – perhaps because it’s the silly season when news tends towards the frivolous because the House of Commons is in recess and us ordinary folk go on holiday – I thought I’d have a little light trawl through a few lesser-known news outlets. Obviously not these: 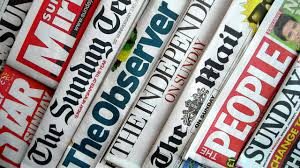 I found one called KarmaTube whose aim is to:

bring inspirational stories to light, using the power of video and the internet to multiply acts of kindness, beauty, and generosity.

And I did find an inspiring video from Jane Goodall about how her mother was responsible for her scientific nature: she never told her off when she took earthworms to bed or disappeared for hours in the chicken shed (to see exactly where eggs came from). The video is a delight (as are many others on KarmaTube).

I found The Canary which states that it:

It’s left of centre and pro-remain, unafraid to say what it thinks and has pomposity-bursting satirical section called Off the Perch.

Then, I found (wishing I hadn’t) the terrifying Trump Real(?) News channel. One Kayleigh McEnany who, until 5 August, worked for CNN, now presents the ‘news‘ for this, erm, channel. Let’s hope it has as short a working life as many of Trump’s staff. Or, that it’s very soon mistaken for an amateur version of Off the Perch (see above).

Then, I found the HuffPost’s Weird news site (you never knew you wanted to know about kilted yoga, did you? Or the odd things people do in the shower that have nothing to do with washing and no … it doesn’t include that).

And then I remembered how very much I love Prospect

and how I still haven’t finished the July issue, let alone the August one, so I stopped my tiny trawl and retired to read it.

I write fiction about the difficulty we have when we try to say what's in our hearts.
View all posts by Angela →
This entry was posted in Creativity, News, News Outlets, Science. Bookmark the permalink.