How Doctors use Poetry, and a blue-green stone

Recently I spent a night in hospital and the thing that struck me about the nursing staff, as I watched them admit new patients to the ward, was their infinite kindness; their ability to explain exactly the same things to each new, slightly-groggy patient as she was wheeled in, as if she was the only person they’d ever admitted, as if she was the only one who mattered. Nursing staff aren’t paid to be kind but, in my short experience on the Isabella Ward at Kingston Hospital, the kindness of the nursing staff was as important as their expertise. It helped me take in what they were telling me, made me feel they knew what I was going through and so I had complete faith that they’d do the right thing for me.

The Hippocratic Oath has been modified since it was written somewhere between the fifth and the third centuries BCE. The version most commonly used today, when physicians graduate, is the one Louis Lasagna rewrote in 1964. It includes this sentence:

I will remember that there is art to medicine as well as science, and that warmth, sympathy, and understanding may outweigh the surgeon’s knife or the chemist’s drug,

I stumbled across this article the other day. It was written in September for the American magazine Nautilus by a newly-qualified doctor who, when he recited the Oath, felt more attached to the scientific nature of medicine than to its art. [Alteration since posting: a newly-qualified doctor should read a second-year medical student. I qualified him too soon!] But, about a year later, he changed his mind. He’d begun to realise the difficulties patients experience when trying to make sense of medical language. He discovered research studies that showed:

That both types of art therapy [music and poetry] produced similar improvements in pain intensity and depression scores. Only poetry, however, increased hope scores.

Patients, including children, were encouraged to listen to poetry and to write their own. To express they way they felt about their illness and treatment and to listen to poems that addressed these things. Contrary to what you might expect, the researchers found that:

Poetry … is a way to both embrace the hospital encounter, and escape from it.

As a result this young doctor, Danny W. Linggonegoro by name, has decided to:

Learn how to meet my patients beyond the chart documents; [to] encourage them to write their own empowering stories; [to] heal as well as treat. In other words, that I’ll honor each and every word in the oath I took last year.

The kindness of the nursing staff on the Isabella Ward also heals as well as treats. 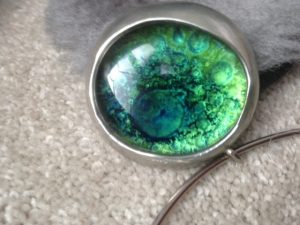 … for its depth, for its colour, for the way it catches the light and for its mystery. It hangs on the simplest silver necklace and I wear it often. But sometimes I just gaze at it.

I write fiction about the difficulty we have when we try to say what's in our hearts.
View all posts by Angela →
This entry was posted in Art, Creativity, Jewellery, Mental Health, Poetry, Psychology, Science. Bookmark the permalink.