Greta Thunberg and climate change; There is No Planet B; Extinction Rebellion and solastalgia

On Friday 20 and Friday 27 September Global Climate Strikes took place across the world, inspired by Greta Thunberg who began her Friday school strikes in August 2018. She sat outside the Swedish Parliament to protest against the lack of action on the climate crisis. The #FridaysforFuture movement has snowballed, as you must have noticed, into a global protest movement to persuade our politicians to act according to the Paris Agreement on Climate Change enacted in 2016 which states that all signatories will:

Strengthen the global response to the threat of climate change by keeping a global temperature rise this century well below 2 degrees Celsius above pre-industrial levels, and to pursue efforts to limit the temperature increase even further to 1.5 degrees Celsius.

Here are some of the thing Thunberg said at a Climate Protest in Hamburg in March and, at the World Economic Forum in Davos at the beginning of the year. But at the UN Climate Summit on 23 September in New York (to which she sailed) she made her strongest speech yet. Listen to her, especially this: ‘You all come to us young people for hope. But we are in the beginning of a mass extinction and all you can talk about is money and fairy tales of eternal economic growth. How dare you?’

How dare we indeed. To stop poisoning our planet and its atmosphere; to stop heading for extinction, we must spend money. A lot of money. We need to invest in green energy and green jobs, put an end to airport expansion and fracking and leave fossil fuels in the earth. We need to spend money to find non-polluting alternatives. In the US, Alexandra Ocasio-Cortez estimates the cost at at least $10 trillion. But the alternative is a planet where our children and grandchildren will be unable to live.

Ann Pettifor, one of the founders of the UK’s Green New Deal proposal (11 long years ago – why weren’t we listening?) says, full interview here:

You can’t have a capitalist, carbon-belching economy, or delusions of exponential growth, and believe you can achieve ecological targets within that [my bold]. … Finance, economy, and the environment are integrated … you need a joined-up policy that deals with all three.

and, from the Green New Deal Bill text: Not to invest in a Green New Deal would be, in fact, to inflict great economic, environmental and social self-harm on the nation.

At the Labour Party Conference this September delegates voted for a version of the Green New Deal that would commit a Labour government to net zero carbon emissions by 2030. But Trump pulled the US out of the Paris Agreement in 2017 because he said it would impose unacceptable costs on the US economy and provide unfair advantages to other countries like China and India. What on Earth was he thinking? In a May 2019 article in the UK edition of The Conversation, this statistic was quoted:

The cost to the global economy if the Paris Agreement is not met and the world hits 4˚C warmer … is an estimated US$23 trillion a year over the long-term [my bold]. This has been likened to the world experiencing four to six global financial crises on the scale of 2008 every year. [Click the links in this quote for the economic details.]

The UK was the first country to declare an Environment & Climate Emergency in response to Thunberg’s speech to Parliament in April 2019, and in September a Green New Deal Bill was tabled (not for the first time). But, so far, it hasn’t become law.

In There is no Planet B, Mike Berners-Lee suggests the things individuals (as well as governments) can do to help stop climate change. 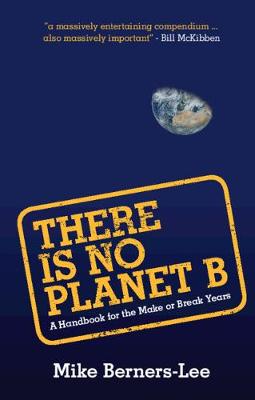 So please do something. Because we all need to act. Now. Here’s what Extinction Rebellion will be doing between 7 & 20 October where I live. And here, in the rest of the world.

In Robert Macfarlane’s majestic Underland, in chapters called The Edge and The Blue of Time, he writes about how what we excrete comes back to consume us; about a nuclear base that’s re-emerging from the ice when those who buried it thought it would remain buried forever; about unweder or unweather, weather so extreme that it seems to have come from another climate or time altogether, and about solastalgia a word coined by the philosopher Glenn Albrecht in 2003 which means distress caused by environmental change. I’m solastalgic and I’ll remain solastalgic until we collectively start behaving as if, as Greta Thunberg put it, ‘The house is on fire.’ Before it really is.

And the thing I wish I could make, in an alternative universe where time is unlimited and all things are possible, is a world where we all pull together to make sure that our planet continues to exist sustainably for our children and our grandchildren and all their children’s children. Just the way we were so sure it would, when we were young.

I write fiction about the difficulty we have when we try to say what's in our hearts.
View all posts by Angela →
This entry was posted in Climate Change. Bookmark the permalink.