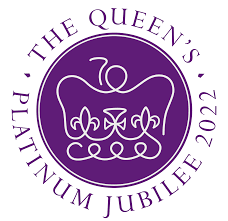 I’m not a monarchist nor a royalist but I am – as Helen Mirren said, recently – a Queenist. This country’s Queen, Queen Elizabeth II, is an extraordinary woman whose seventy years as head of state was celebrated in the UK between 2 and 5 June 2022. Her example of dedication, faith, hard work, duty, leadership and an apparently inexhaustible interest in the many many people she meets is more than admirable, it is extraordinary. Who among us could manage that, even for ten, let alone for seventy, years?

I’m old enough to remember a time when portraying the Queen in fiction or song (apart from God Save the Queen) wasn’t much done (or approved of). This Guardian article, by Vanessa Thorpe, published on 5 June, remembers:

When Alan Bennett brought his version of the Queen to the stage in 1988, he was one of the first to take a parodic look at the woman who personifies the British national brand. His one-act play, A Question of Attribution, tackled Soviet espionage in the royal staff; Prunella Scales, stately and sardonic, caused a sensation in the role of the Queen.

Twenty years later, Bennett returned to the supposed inner life of the monarch in his novella, The Uncommon Reader. When the royal corgis chance upon a mobile library, the Queen borrows a book, prompting a broadening of perspective that upsets her worldview.

Now, as the Guardian article continues, it’s not an uncommon thing at all to portray the Queen in fiction. Here’s the Radio Times’ gallery of actresses who’ve portrayed her.

But the portrayal that touches me is our Poet Laureate’s Queenhood. I can’t print the whole poem here for obvious copyright reasons, but you can find it at the link above, you can buy it here or you can hear Simon Armitage reading some of it and talking about it here. Quite often, in the poem, Armitage juxtaposes the regal and the quotidian.I particularly like the song of the blackbird at the end of the extract below.

Under Faber’s Fair Use terms, here’s a verse (there are, appropriately, seven): this is the first, from Queenhood by Simon Armitage:

An old-fashioned word, coined in a bygone world.
It is a taking hold and a letting go,
girlhood left behind like a favourite toy,
irreversible step over invisible brink.
A new frock will be made, which is a country
hemmed with the white lace of its shores,
and here is a vast garden of weald and wold,
mountain and fell, lake, loch, cwm.
It is constancy and it is change:
the age of clockwork morphs into digital days,
but the song of the blackbird remains the same.

I write fiction about the difficulty we have when we try to say what's in our hearts.
View all posts by Angela →
This entry was posted in Books, Creativity, Democracy, Elizabeth II, Equality, Fiction, History, Women. Bookmark the permalink.