Until George Floyd was murdered on 25 May 2020, I had not begun to acknowledge, let alone unearth, my inherent racism. That racism includes not reading or even thinking about the work of Black writers. But since that May I’ve been reading Black writers and my eyes, ears, heart and mind have been opened (about time, I know). Bernadine Evaristo has often been my guide and when I heard her talking about John Howard Griffin’s Black Like Me on Radio 4 a while ago I began reading it. It is, as Evaristo said, to Penguin’s June 2020 request for recommendations for books to understand and then act on racial injustice at home and worldwide:

The account of John Griffin, a white journalist, who passes himself off as a dark-skinned Black man in the American Deep South in order to better understand racism. And better understand it he does, when he finds himself being treated despicably simply because he now looks Black.

‘Oh, but that was the 1950s’, I hear some people protest. Look, here’s the thing: it’s only when you walk in the shoes of a Black person, especially a Black man in a majority-white country, that you will ever really understand the pernicious prevalence of racism. To quote Griffin, “They could not see me or any other black man as a human individual because they buried us under the garbage of their stereotyped view of us.”

The same applies today, which is why Derek Chauvin murdered George Floyd with the complicity of three other policemen. Everyone needs to read this book. 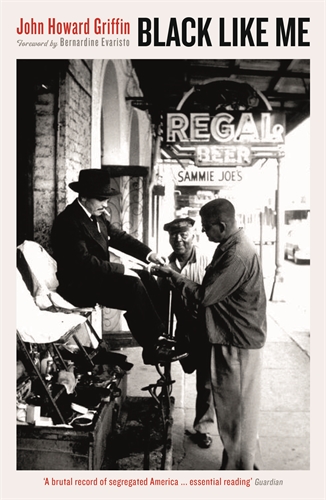 Evaristo wrote the Introduction to the republished 2019 edition (Black Like Me was first published in 1960). At the end there’s a piece Griffin wrote in 1979:

I tried to establish one simple fact, whch was to reveal the insanity of a situation where a man is judged by his skin color, by his philosophical “accident”– rather than by who he is in his humanity.

The insanity of a situation where a man is judged by his skin color …
rather than by who he is in his humanity.

The Reader, a wonderful charity which believes that:

everyone can experience and enjoy great literature, which we believe is a tool for helping humans survive and live well

took part in Liverpool Against Racism week at the end of April and curated a list of books for babies, young children and young adults written by people of colour. It’s here. They also curated a much longer list of extracts from books written by Black writers for adults. For copyright reasons that list of extracts is only available to those who took part in the Liverpool Against Racism / The Reader week, but I’ll be reading those books and writing about them in blogs to come.

Tomiwa Owolade, recently-appointed race and literature consultant at The Reader, has been asked to help the organisation find a way to read with sensitivity, nuance and openness on matters related to race and ethnic diversity. He writes, in the latest edition of The Reader’s biannual publication, The Reader:

I think this should be done not through a knee-jerk response to diversity, which analyses texts through the reductive lens of race, but by insisting on the power of literature to transcend racial barriers. Shakespeare, George Eliot and Charles Dickens can speak to anyone – and so too can Richard Wright, Toni Morrison and James Baldwin. I write fiction about the difficulty we have when we try to say what's in our hearts.
View all posts by Angela →
This entry was posted in Allyship, Antiracism, Art, Creativity, Education, Equality, Fiction, History, Human Rights, Literary Prizes, Mental Health in Fiction, Morality, Psychology, Racism, reading, White Allies, Writing. Bookmark the permalink.